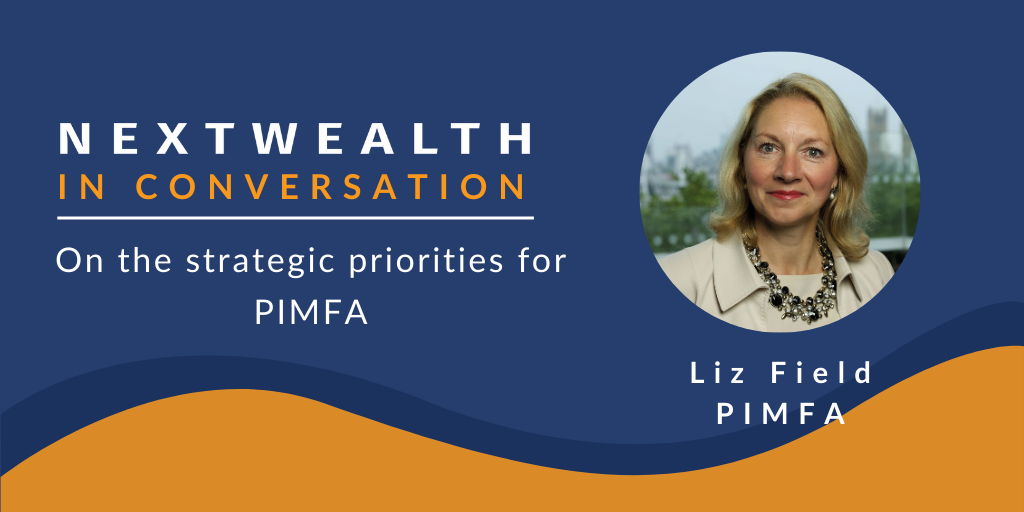 Liz Field is CEO of PIMFA, the Personal Investment Management & Financial Advice Association.  And as she explained when she joined me for a Women in Platforms session recently, it’s a challenging time to be playing that role.

PIMFA, Liz told us in the slightly weary tone of someone who has given this explanation rather frequently, is a trade association, not a professional body. It represents a large number of different kinds of organisations – wealth managers, financial advisers, stockbrokers, DFMs, execution-only providers, platforms – but the common strand is that all are consumer-facing, dealing directly with individuals.  PIMFA’s job is to lobby on their behalf and to promote the sector as a whole – as Liz summed it up, it’s “the voice of advice, whoever is giving it.”

PIMFA publishes a manifesto, derived from consultation with its members, which establishes priorities from a list “potentially as long as your arm.”  Currently, there are six, and you only have to see what’s included to understand why this is a challenging time for Liz and her team:

These are all big, important and fascinating topics, and Liz touched on most of them when we spoke.  But her main focus – in our meeting as in her working life -was the first.   There are few hotter topics in financial services today than the cost of regulation and supervision.  And Liz’s job – to define a position on the issue for her large and diverse membership, and then to lobby for that position with the multiplicity of other stakeholders involved – is about as tough as it gets.

Her starting-point is, very simply, that robust and effective supervision is an absolutely essential part of building a reputation as a profession that consumers can trust.  It’s massively in the industry’s interest that supervision works, and is seen to work – and that means it will cost.

But at the same time, there’s no denying that in absolute terms, the cost of regulation and supervision now poses a major threat to many of her members and consumers.  With FSCS, FCA and PII costs all showing significant year-on-year increases, and weaker PII cover calling for firms to find more capital to strengthen their balance sheets, all firms are seeing increases in costs of up to 50% this year alone and some more than 100% – a rate of increase that’s simply unsustainable.  And for large firms, their total costs now run to many millions of pounds.

No wonder that many well-behaved firms, forking out very large sums of money to protect consumers against misbehaviour which they have nothing to do with, feel seriously aggrieved.  But in Liz’s job, just joining in the general chorus of complaint doesn’t help.  She needs concrete proposals to turn the tide and start reducing the burden.

There is a big idea:  data.  Much of Liz’s lobbying effort revolves around promoting the theme that with better, broader flows of data between the various parties involved, much greater transparency can be achieved, and issues can be resolved – or indeed prevented altogether – before they become expensive.

Data, Liz recognises, is at the heart of the FCA’s transformation strategy too, and she’s hopeful that data in relation to the FSCS will be included.  Meanwhile, the work that’s needed won’t happen overnight:  in the short term, Liz is looking for a quick win by lobbying for the money raised from supervisory fines to be offset against the bill.

Hearing Liz rattle through the alphabet soup of acronyms of the innumerable organisations with which she has to maintain a dialogue, it’s very clear that quick wins – wins that get everyone on board – are sure to be few and far between.  But she’s convinced that it’s worth the effort.   Another of PIMFA’s projects is to do with promoting the value of the sector as a whole, and the real, measurable benefits to consumers in terms of their financial and mental wellbeing.

“We’re the good guys,” she says, citing research conducted by the International Longevity Centre in association with Royal London and showing that people who take advice are very much better off than people who don’t.  “We need to help people recognise all the good that my members do.”

You can watch the full interview here and if you want to sign up to the Women in Platforms Community, you can do so over here.