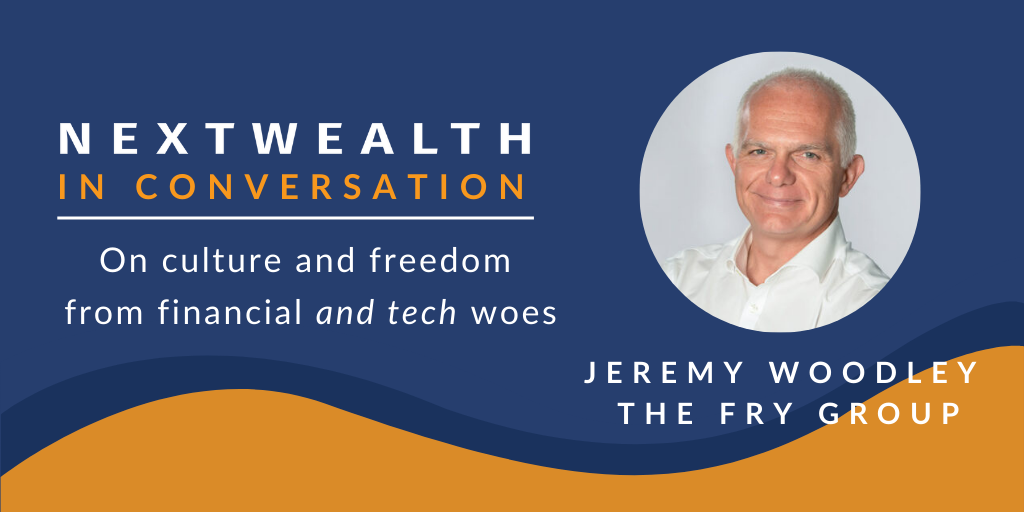 Jeremy Woodley is the very model of a 21st Century financial services chief executive (recently turned chairman), with preoccupations dealing with such contemporary themes as his company’s culture, values, purpose, diversity scorecard and record of success – or lack of it – in enabling the components of its tech stack to talk to each other.

All of which arguably makes it all the more surprising that The Fry Group business dates back not just to the 20th century, but, unlike almost all others in the sector, to the 19th.  The Fry Group was founded in 1898, by Thomas Fry, and today the firm positions itself as an international expert in UK tax, estates and financial planning, serving a global client base from eight offices around the world.

With a headcount of around 160 and a total of some £2 billion assets under advice, it’s already a significant business.  But when I sat down for a Zoom chat with Jeremy recently, he made it clear that the firm still has big plans for the future.  In fact, a wide range of corporate initiatives have been laying the foundations for a period of substantial growth.

The first of these on the agenda is the launch of the group’s own Managed Portfolio Service, introduced in July 2020 and with over £250 million under management just six months later.  Jeremy insists that this is not a step along the road to full vertical integration – “We have a complex client base,” he tells me, “and we will never meet their needs with just one solution”.

With the MPS running smoothly, Jeremy’s focus has moved more recently to the business’s two most mission-critical elements: people, and technology.  As far as the team is concerned, the aspiration is to be recognised as an employer of choice in all their eight office locations.  And as the business has grown, this has meant investing in a number of more advanced and sophisticated structures and processes to achieve that goal.  The Group recently hired its first Head of HR, and with their involvement, has worked hard to define its values and ensure that they’re deeply embedded in the business. “One Team, Delighting Clients, Excellence and Passion,” says Jeremy, reeling off all four values without hesitation. “We hire to them, appraise to them and reward to them – and the result is a strong and distinctive culture that gets steadily stronger over time.  Our average length of service is huge, which I think proves the point: if people stay two years, they tend to stay 20.”

This emphasis on culture and values inevitably means that opportunities to grow by acquisition are limited – much better not to do a deal, says Jeremy, than do one that threatens the culture.  That said, there’s always the possibility of finding a really strong cultural fit – in which case it would be daft not to.

At the same time, the firm has also worked hard to find a meaningful definition of its purpose.  Jeremy absolutely shares the belief that pure business targets aren’t enough to inspire, and that the firm has a higher aspiration which he defines as “helping people to achieve financial freedom.”   This, he explains, isn’t just about a level of wealth – a person can be very wealthy, and still not be financially free.  It’s actually more about freedom from than freedom to – freedom from worry, freedom from uncertainty, freedom from unwanted or unrecognised risk.  And while this purpose focuses firstly on clients, it’s actually a bigger idea than that.  Current work in progress includes a CSR programme which will develop new ways of extending the idea of financial freedom out into the wider community.

It occurred to me that it would be a very good thing if the firm’s technology offered the same sort of freedom to Jeremy and his colleagues, and I could tell from his rather carefully-worded comments that there are developments – and new investments –  in the pipeline in this area too.  Connectivity is the issue uppermost in his mind, and he expresses his objective very plainly.  “There’s tech that delivers to clients, and tech that helps run the business,” he tells me.  “I want them both to talk to each other, and all too often they don’t. This can’t just carry on being one of those issues that our tech suppliers tell us is ‘on their road map.’

Before our conversation came to an end, there was still time to touch briefly on a considerable list of other big and – again – contemporary themes.  To name but a few, the firm’s carbon footprint; its paper consumption; low levels of financial literacy in certain areas of the population; diversity, and the firm’s journey towards achieving some challenging gender balance targets (the balance between men and women is already 50/50, Jeremy tells me proudly).

I wondered how much of our conversation would have made any sense to Thomas Fry when he founded the business in Queen Victoria’s reign.  I thought very likely none of it.  But then, you won’t stay at the forefront in an industry like this across three centuries unless you keep your thinking and focus looking forward.

If you’d like to share your thoughts with NextWealth and update us on your business, get in touch. You can also join our Research Panel to share your views anonymously on advice tech and other key topics in the industry.