Client onboarding & the cost of advice 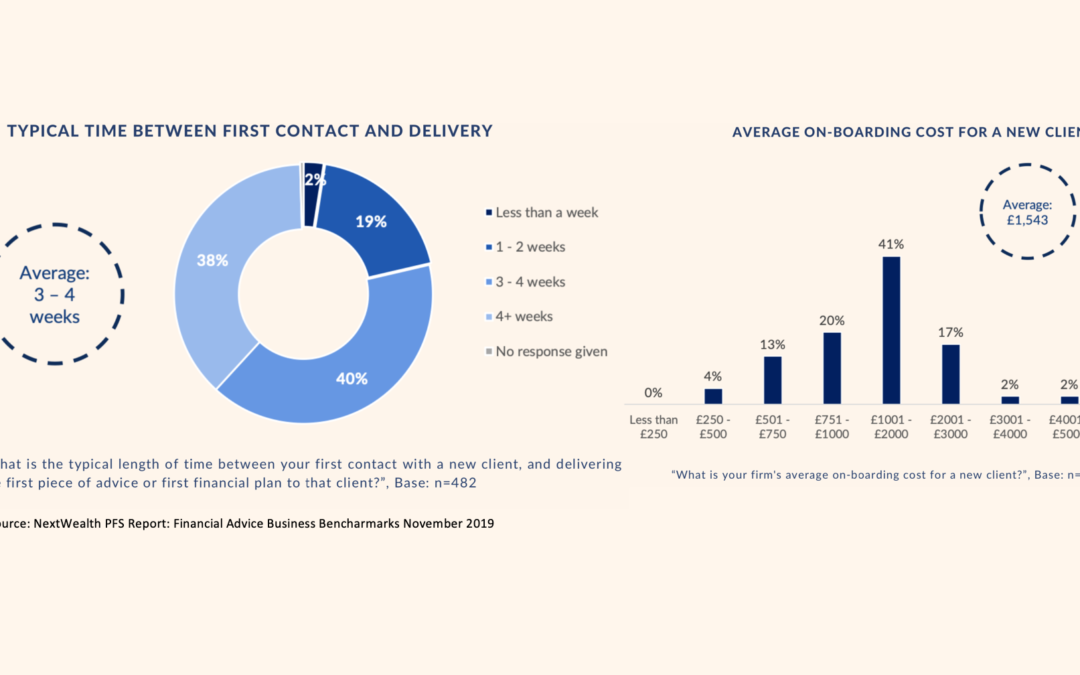 A debate erupted between Henry Tapper and Rob Reid recently on Twitter, which came down to a stat published by NextWealth: it costs £1,500 to onboard a client. Henry asked “are advisers who charge less than £1,500 behaving irresponsibly?” No, but firms that don’t cover their costs or who cross-subsidise are.

Why does it cost so much to onboard a client? Spoiler alert – it’s not because of advisers that this cost is so high.

Let’s unpick this a bit to find out why it costs so much to onboard a client. These stats are based on a survey we did last summer with the PFS. The full report can be downloaded here.

Advisers aren’t dragging their heals  – this is largely outside their control and can be hugely frustrating. In our work researching adviser tech, we constantly hear form advisers who want to offer a slicker service to customers. But they are often at the mercy of providers.

In 2018, the FCA estimated that there were 10m pension policies held with closed book providers, representing £400bn in assets. By our estimate, that is slightly more than assets held on adviser platforms.

Whether or not a client is advised, he or she will need to get details of their pensions from these providers. And then there is the job of making sense of what you get back from those providers!

This is not the fee the customer pays – this is the cost to the financial advice business. Firms can charge what they feel is appropriate for financial advice. The value has been well documented. Providers who drag their heals or who refuse to sign up to industry standards for data sharing are driving up the cost of financial advice. Some have a vested interest in doing so.

Delays are a huge area of frustration for advisers who tell us they spend about one third of their time with clients. Admin takes up the most time away from clients. We need to fix this! Open Finance has the opportunity to address this by forcing closed book pension providers to share their data via API. This could reduce onboarding time and cost significantly.

A final note, cost is important but also critical is the customer experience. I opened my Starling bank account in minutes. Why should it take four weeks to get financial advice?